You've indicated that you are not attending this event.
You've successfully registered for this event.

From warfront news updates to Volodymyr Zelensky’s December address to the US Congress, you’ve likely heard about Ukraine at least a few times since the 2014 Revolution of Dignity ousted pro-Kremlin leadership and solidified Ukraine’s move away from generations of Russian imperial and then Soviet control. Ukraine’s long fight for self-determination was met in 2022 by a full-scale Russian military invasion that has caused one of the largest humanitarian crises of our century. What has this time been like for RPCVs who served in Ukraine? And what was our experience of Ukraine before it became headline news?

Santa Barbara Peace Corps Association and the Returned Peace Corps Volunteers Alliance for Ukraine invite you to an online discussion featuring a panel of five Ukraine RPCVs whose perspectives span several decades of Peace Corps in Ukraine and whose host communities dot the country from the Donbas to the western borders.

Join us online at 5:30 PM Pacific on Thursday, January 26th. This 90-minute moderated panel discussion will include some time for audience questions.

Login to RSVP for this event or RSVP without logging in.

RSVP for Perspectives from Ukraine: an RPCV Panel Discussion 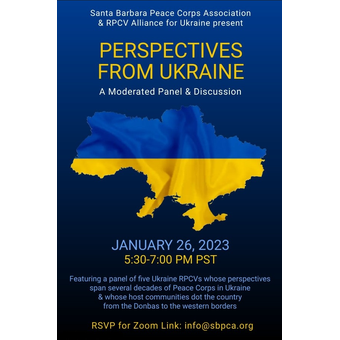