Ukrainian Action: An Origin Story Built on Decades of Friendship 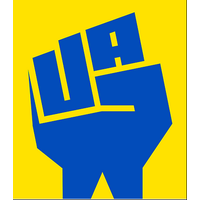 The Peace Corps was established to promote world peace and friendship - yet now, a vast network of former volunteers, staff, counterparts, and host families who devoted years of their lives to this purpose find themselves living through war. A full-scale military invasion by Russia has shattered what peace Ukraine has been able to maintain since the war began in the east in 2014. In response, Ukrainians and the RPCVs who served there have shown just how impactful a network of friends can be.

If you ask long-time Peace Corps Ukraine employee Roman*, the stories of how RPCVs and Ukrainian partners have stepped up to support each other in 2022 would likely fill thousands of pages. We don’t have thousands of pages, but we do have the story of how Roman and RPCV Jeffrey Hartman - friends ever since shortly after Jeffrey’s service from 2002-2004 - are saving lives through Ukrainian Action, a US NGO founded by Hartman in March 2022. Both men spend a lot of time on the road, but we were able to catch them for an interview in December 2022.

*For security purposes, the Alliance does not publish the full names of people who are still in Ukraine.

What is now an extensive international operation began as one of innumerable messages sent between RPCVs and contacts in Ukraine checking in on one another after the first bombs of the full-scale invasion fell in February 2022.

“Roman was one of my first calls to Ukrainian friends when the war broke out”, Jeff shares. “He had very quickly mobilized himself, which was an inspiring sight for me and also had an impact on mobilizing me to get involved.” 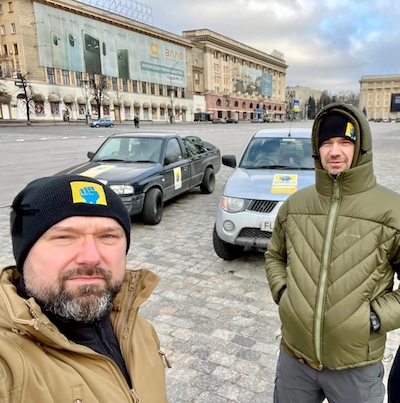 On day three of the invasion, Roman signed up for active duty to defend his country. He then worked to get his family to safety, relying on an extensive network of connections - among them many former counterparts and host families - to find a safe place for his wife and children.

“I remember sleeping on the floor of some shelter in Chernivtsi with my family. In the middle of the night, I started texting counterparts and friends. One of the counterparts offered me a house for a few days in Lviv, so we stayed there. Then another counterpart found a family in Poland, and so I sent my family to Poland in this tiny village, not knowing when I’ll see them again.”

Fortunately, Roman’s family was able to return to Ukraine in September after months of difficult separation.

As hard as it was being apart from his family, Roman says it allowed him more time to do volunteer work and participate in defense unit training. He noticed almost immediately that the people in his unit were inadequately supplied for the scale of what they were facing - lacking even proper clothing - putting them and the civilians they protect at risk. He made an agreement with his unit’s commander so that he could devote more of his time to supply procurement. Roman immediately started talking to friends overseas, mostly RPCVs, who volunteered to raise funds and provide equipment to Roman’s unit and others in need.

As Jeff tells it, “That was the initial genesis of Ukrainian Action - to help our friends who were in trouble or in need, in whichever way that might be.” He organized supply convoys from where he is based in the UK, and simultaneously began establishing a nonprofit organization.

“He started sending trucks that I would be distributing based on needs and urgency”, Roman recalls. “I was putting together lists of equipment and supplies, both for civilians and military, that would go to those who need it the most.” 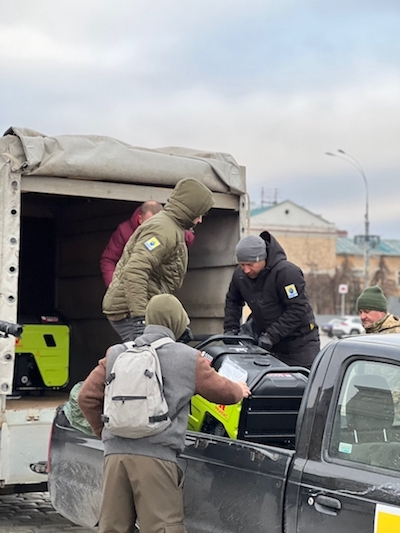 Since then, this initial network of informal assistance has crystallized into a systematic and well-organized effort. Ukrainian Action was incorporated by the end of March 2022, and through active fundraising procured vehicles and supplies, which they drove every weekend to Ukraine. Their team has established a flow of information from points of need in Ukraine, and Roman plays a key role in helping to vet the requests coming in.

After prioritizing which requests to meet first, the Ukrainian Action team procures the needed items - mostly trucks, protective supplies, clothing, generators, and other technology  - to be sorted, labeled, and safely stored in a warehouse. Volunteers drive the trucks loaded with supplies from the UK to Poland, where Ukrainian volunteers help to get everything to the Ukrainian border. Roman and his team meet the vehicles at the border to bring them into Ukraine, service the vehicles if needed, and distribute them to the individuals or groups who have requested them.

Trucks are essential for evacuating wounded people from the front lines. When asked to describe the human impact of a truck, Roman replies: “When someone who received a truck writes back to us later on, saying ‘Your truck saved lives today. Some lives it didn’t save, but we tried…’”.

Roman is actually making his way back from a delivery, taking the interview for this story at a roadside cafe after some 12 hours on the road. “The shelf life of a truck is not too long on the battlefield. Some live longer, some die real fast. But if the truck dies, it’s no big deal. I mean it’s money, yes, it’s logistics. But when people die, it’s a loss. A loss of life. The intention here is to save as many lives as possible, whether it’s the service people or the civilians who need help urgently.”

As of December 2022, Ukrainian Action has donated 118 trucks, along with the supplies they carry, to friends and civilians in need in Ukraine, with no signs of slowing down. 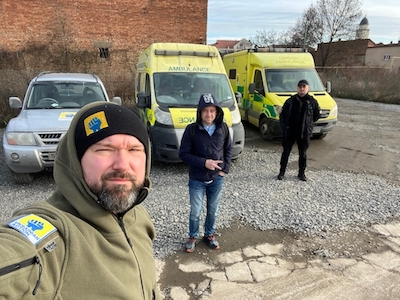 Both Roman and Jeff see their endeavor as an outgrowth of what Peace Corps service is meant to be, made possible by their ongoing investment in building and maintaining connections.

“I applied to the Peace Corps because I loved the opportunity to make a difference,” Jeff starts, making the observation common among RPCVs that the initial impact of his service was hard to gauge. “Now I can say I think I made a difference, and it took twenty years.”

Jeff finished his Peace Corps service shortly before the Orange Revolution. “That was an influential experience for me to see. For two years, I had worked in the education space, trying to share new ideas in a place that was coming to terms with its new life. You don’t see change day to day, over the course of two years, then all of a sudden, at the end, the whole nation decided to say, ‘You know what? That’s enough, we’re going to support change and make a difference.’”

Some of Jeff’s former students are now volunteers with Ukrainian Action, and his host brother is actively assisting with the distribution of supplies to heroes heading to the front from the Cherkasy region. The same network of former counterparts and host families that helped Roman find shelter for his wife and children now also step up when, for example, a vehicle needs fuel en route during a supply shortage. This cohesion and collective effort has spread even further throughout Ukrainian society, with strangers readily helping one another - and it also extends to Ukrainian government partners. Roman cites the Ministry of Community Development as one example. “That shows you the magnitude of collaboration.”

The irony isn’t lost on Jeff that his Peace Corps service ultimately got him involved in a war effort. Many RPCVs have shared the experience of finding ourselves undertaking endeavors we never expected over the past 10 months: researching export regulations on armored vests so that former students don’t go to the front unprotected; learning which tourniquets are best for injuries caused by explosives; sharing guidelines for how to talk to one’s children about air raid sirens. This is what friendship looks like in a country under attack. Friendship is coming together for survival. As Roman puts it, “This is the real stuff.” And if we make it through together, maybe we’ll again have the privilege of struggling through Ukrainian grammar and convincing our host mothers we don’t need another serving of mlintsi in a peaceful Ukraine.

“We’re going to do this until the end of the war,” Jeff responds when asked what’s next. “We’re going to do this when the war is over, and we’re going to continue to build the NGO. The vision is to become a long-term development partner of the country, which is the mission I suppose I started out with 20 years ago, and it’s taken a really interesting catalytic turn. This is definitely only the beginning.”

You can support Ukrainian Action as a donor or volunteer.  They also sell merch!

Do you have a story you want to tell? Reach out to the RPCV Alliance for Ukraine. We are always looking for stories to feature, and welcome contributions from guest writers.

Please also share your own efforts through our 2022 Impact Surveys: