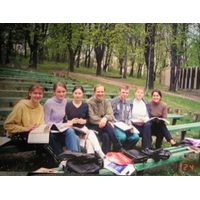 When Americans retire, most of us pump the breaks and move to a warmer climate. For Rob Paullin, slowing down is not an option. Since completing his Peace Corps service as a TEFL Volunteer in Kremenets in 2003, he has returned to the former Soviet Union over 20 times as an election observer for the Organization for Security and Co-operation in Europe (OSCE). It was wonderfully easy to transcribe my phone interview with Rob into an article because of his many years of working in radio and television and teaching mass communication.

DISCLAIMER: All views expressed in this article belong to the individual and do not reflect or represent the opinions of the Organization for Security and Co-operation in Europe.

What made you want to want to join the Peace Corps?

I was 11 years old and I remember President Kennedy giving the speech announcing that he wanted to pursue what became the Peace Corps. That was the first political speech that resonated with me. It was always in the back of my mind until I decided to do it in 2001.

What career path were you on before you joined?

I was a radio and television journalist for many years, then I taught mass communication at Illinois State University. It helped [in Peace Corps] to have experience as a classroom teacher and working in front of students. Also, when you are on the radio or television you get used to being the center of attention, so being a foreigner in a small town that doesn’t see many foreigners might be a challenge for some, but it didn’t bother me to be stared at because I was used to it.

What was your host organization and how was your service?

I was assigned to teach at a small college which graduated to be an institute. It was described to me by other RPCVs as the last year of American high school and the first few years of university. I think today they’ve changed the Ukrainian education system to be more western. Sometimes I would also take a couple of my students to the Ternopil capital to work with the internet which was in its infancy at the time. It also gave them a chance to speak with other PCVs and hear different accents which helped them develop communication confidence. 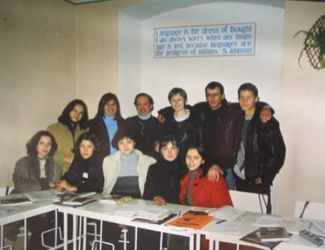 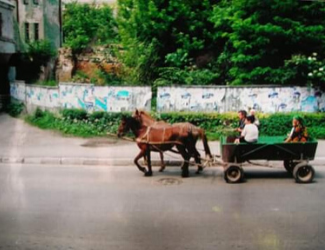 Where cell phones issued to volunteers at that point?

There wasn’t even cellular service in my town when I got there, but about half way through my tenure, they put up a [cell] tower and I went out and bought one only so I could communicate with Peace Corps Headquarters. 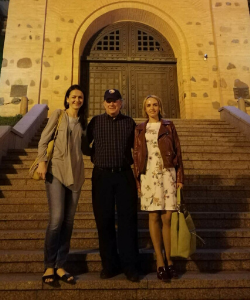 Who were the most influential people for you during service?

For me, it was my students. I learned from them at least as much as they did from me. I let their needs be my guide. When I last visited Ukraine, I met up with a few of them.

What did you do after you COSed?

A former PC employee in China had found my name somewhere and contacted me about teaching in China, so I actually taught English at a University there for several months before I came back. When I eventually returned home, a political friend of mine got me appointed to the board of review which, if you own property, is essentially the appeals court for assessment (if you disagree with your property assessment for tax purposes). I did that for two terms (doing a few OSCE terms in between).

How did you get involved with OSCE? Which countries have you worked in?

When I got back from China, that’s when the news about the Orange Revolution started to circulate and one of the people I knew in government service had been to Ukraine as an observer, so I met up with him to compare notes and ended up signing up to be an observer with OSCE myself. It’s not a full time job, but it's something that I’ve been doing a couple times a year all over the former Soviet Union including Russia since about 2006. I’ve been back to Ukraine four times, and I’ve also worked in Macedonia, Moldova, Armenia, Albania, Georgia, Uzbekastan, Kazakstan. Interestingly enough, whenever I do one of these, I always meet at least one former Peace Corps Volunteer who does OSCE election work. It seems like a popular thing for former volunteers to do.

Can you describe exactly what your duties are when you are overseas as an election observer?

There are two areas of responsibility. First, is a short term observer, you fly in a week or so before the election, you have a few days of briefings in the capital, then you are sent out to wherever you are assigned. You spend two days observing preparations for elections and then on election day, you observe voting, then the counting and tabulation. You have no authority to say anything, but you observe and report back to OSCE. Afterward, you go back to the capital city where you debrief and then you head home. Overall it’s 10 days to two weeks.

As an observer, you have both an interpreter from the host country and a driver. You are teamed up with a counterpart who is not from the same country (in my case its often the UK, Australia or New Zealand).

Did you observe the most recent election in Ukraine?

I’ve been there twice this year. I was there for the parliamentary election and the presidential run-off elections. I couldn’t do the first part of the presidential election because I had another OSCE commitment in Armenia. I keep busy chasing voters!

You have to have “professional” election experience (such as a volunteer election official) in your home country and some kind of non-tourist experience in the former Soviet Union or the Balkans. The application process is through PAE (Pacific Architects & Engineers). It’s fairly lengthy, but not difficult to fill out.

For a detailed description of the application process, visit: Observer Qualifications and Application Process

If you know a PC Ukraine returnee who deserves a Spotlight article, email us at allianceforukraine@gmail.com with the subject line “Spotlight nominee” with a brief description of that person and a way to contact them.