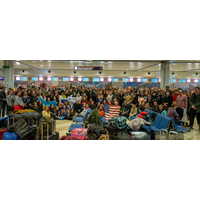 About a month ago I walked into the newly-built library at my site and, fumbling over my Russian, signed up for a library card. I often passed this handsome brick building as the marshrutka rattled its way to the center of town, but had never ventured inside. Now that the library was officially open and I had a day off from work at the local college, I stopped in. I had set myself the goal of reading three books in Russian in 2020 and found a decent candidate for book number two with the help of the librarian— a translated collection of Agatha Christie short stories.

Unfortunately, I never got past the first few pages. Just two days later, Peace Corps Ukraine volunteers got the dreaded order to evacuate as the country began to shut down and would soon close its borders. With just under 36 hours to get to Kyiv from the southern border of Ukraine’s remote Budjak region deep inside Odeska Oblast, I hardly got the chance to say goodbye to my host family, colleagues, friends, and students. Time to process the wide spectrum of emotions that flitted through of my brain was out of the question. I packed my life up and prepared for the long journey home to the U.S. 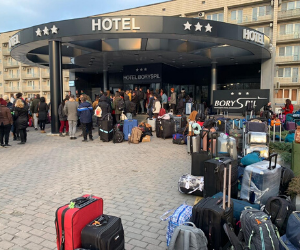 All across Ukraine, volunteers squeezed as much as they could into suitcases, booked transportation, and made logistical arrangements with landlords and counterparts, all against the swift current of evacuation proceedings. We learned early on that Groups 48-53 would COS early, while Group 54 volunteers like me would be placed on an administrative hold for the next 60 days. Some volunteers had been out of the country on vacation, others were away from site conducting trainings, and many, like me, were immersed in the daily activities of their towns and villages, only to be uprooted first to Kyiv, then to Washington, DC, and beyond.

Of course, it wasn’t quite as simple as that. Arriving from different corners of Ukraine, volunteers crashed in Airbnbs around Kyiv for what was supposed to be our one night in the city. Some of my friends got tattoos of the Ukrainian coat of arms to show their affection for the country and to commemorate their service. Others went out to eat and drink, celebrating what we thought would be our last few hours all together in Ukraine.

The next evening 261 volunteers swept into a near-empty Kyiv-Boryspil airport and anxiously waited to board a chartered flight out of Ukraine. But around 10pm local time we received word that our flight had been delayed and we would instead be staying the night in two different hotels near the airport. 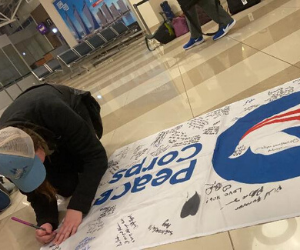 Accustomed to shifting plans at our sites, volunteers rolled with the punches. We worked together to lug suitcases on and off of busses and did our best to reassure each other that everything would work out ok. By midnight we had settled into our hotels, cautious not to unpack more than our carry-on, and prepared to fly out the next morning. But that itinerary did not come to pass, either. Instead, the ensuing four days were an exercise in organized chaos. Flights were rescheduled, then delayed, then canceled. Food allowances were dispersed, spent, and replenished multiple times.

We quickly became experts in killing time. Mid-morning board games? The perfect way to start the day. A two-hour lunch? No problem, we have nowhere to be. Three afternoon trips to the grocery store just to find more ways to spend your 1,000 UAH stipend? At least it’s nice outside. Someone found a Napoleon Dynamite stream online? Text me their room number. In fairness, all that time cooped up in hotels proved to be good practice for the mandatory 14-day quarantine that awaited us back in the U.S. 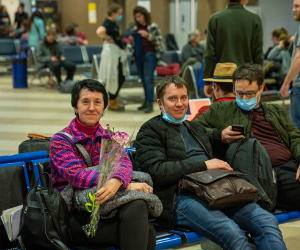 Finally, after five days of hanging around and seven flight delays, we got an excited email from Peace Corps Ukraine staff (the subject line was “Let’s Go!!!”) that a new chartered flight had landed in Boryspil.* This was the real deal; we would depart from Kyiv in the early hours of March 20th.

As we prepared to board the buses to Boryspil, we received another email, this time from Peace Corps-DC, the thrust of which went something like this: “All PCVs, regardless of post or time spent in-country, will COS and become Returned Peace Corps Volunteers upon their arrival in the U.S.” My heart dropped as I skimmed the email, but only when I got down to the lobby and saw everyone’s luggage piled outside did the news sink in. We might not be coming back. After placing my bags down by the entrance, I quietly walked around to the backside of the hotel, sat down on a bench beyond the reach of a nearby skylight, and wept.

The simmering anxiety of the past week had finally boiled over for me. But beyond that I was struck by everything that I had left unfinished. My counterparts and I intended to introduce an online teaching platform to our college. Some of the men in my town had offered to take me fishing in the spring. I was going to learn so many new Russian words from that Agatha Christie book. Each of these plans had already been put on hold and in that moment I realized that they might never happen at all. I’m certainly not unique in this regard. Every Peace Corps-Ukraine volunteer had projects that they were unable to start or unable to finish. As such, many volunteers have struggled with feelings of anguish or guilt, that we left our sites before we could complete the plans we had made with our community partners.

Frankly, it’s been difficult for me to find positives to take from evacuation. But maybe this collective feeling of unfinished business can tie us even more closely to Ukraine. Maybe the grants not written, the trainings not held, the classes not taught will prove to be just as important as those that were.  None of the eRPCVs I’ve talked to were happy to be leaving— everyone wanted to stay. So let’s harness our love and gratitude for our communities, our sadness and disappointment at our departure, and channel that toward continuing the Peace Corps mission in Ukraine. The fact that we could not finish our service does not mean that our service has to finish.

Even if we cannot all return to Ukraine as Peace Corps volunteers, we can continue our service in other ways. We can cheer on and counsel the next group that sets off for Ukraine. We can support our Ukrainian communities, organizations, counterparts, friends, and family, even from afar. We can serve Ukraine by paying attention to news there and by advocating on behalf of the country and the people that welcomed us all. And of course we can help each other as we transition to the next phase in our lives or wait for PC-Ukraine to reopen.

Whatever we decide to do after service, I hope we all maintain and strengthen our links to Ukraine. Whether you served in-country for a few months, a year, a full 26 months, or longer, we all have a part to play in continuing to promote peace and friendship in Ukraine. We can begin by working on Goals 2 and 3, engaging with our host communities online and sharing our experiences and knowledge gained in Ukraine with Americans. It’s even possible to pursue Goal 1 virtually: hold community English clubs via Zoom or Skype, or share technical resources with your organizations so they can hit the ground running with the next cohort of volunteers.

I may never get to finish that book of short stories I left at site. And that’s ok. I’ve started reading the memoirs of Oleg Sentsov, a Ukrainian filmmaker who had been unjustly imprisoned in Russia before his release last year. More than an opportunity to practice my Russian, it’s a chance to learn about one of the modern heroes of Ukraine and maintain my connection to the country and its people. Our service was interrupted, but it’s far from over. Finish what you started, begin something new, or collaborate with others so that our service to Ukraine extends far beyond our untimely evacuation.

*It must be said that Peace Corps-Ukraine staff did a great job handling this weeklong logistical nightmare. They had to coordinate charter flights with multiple parties in Ukraine and elsewhere and keep 261 antsy volunteers calm amid a developing global pandemic. So thank you PC-Ukraine staff, with a special shoutout to the Safety & Security team for communicating with volunteers every step of the way.