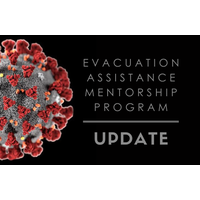 The RPCV Alliance for Ukraine launched its Evacuation Assistance Mentorship Program in mid-March to provide additional support for Peace Corps Ukraine Volunteers forced to evacuate from Ukraine due to the COVID-19 pandemic.

While volunteers were still awaiting departure from Kyiv, the Alliance began the process of matching Ukraine RPCVs and evacuees who signed up for the program into mentor-mentee partnerships. In total, the Alliance for Ukraine paired  43 mentors and mentees who got the chance to share their Peace Corps Ukraine experiences with each other, discuss future career options together, and support one another in these unprecedented times.

Just over three months have passed since PC Ukraine evacuees arrived in Washington and began the process of reorienting their lives and reintegrating themselves back into life in the U.S. Now that RPCVs and evacuees have had some time to get in contact and develop (virtual) relationships, the RPCV Alliance for Ukraine wanted to share some of the program’s success stories with the Peace Corps Ukraine community.

The next few editions of the Alliance’s e-newsletter will highlight a handful of mentor-mentee relationships. First up are mentee Mark Salamone, (Group 54, TEFL) and mentor Jake McGrew (Group 46, TEFL; Group 1 Response):

Originally from Wauwatosa, Wisconsin, Mark joined Peace Corps following his graduation from college in May 2019. After two months of language and technical training he moved to Radekhiv, a small town in Lvivska Oblast, in October. Teaching English at a local school, he grew to love Radekhiv’s friendly atmosphere and marveled at its historic 19th-century buildings. So when the order to evacuate came, Mark admits he felt a little lost, having worked so hard to integrate into his community and develop his language skills. He wanted to talk to someone who could help him process the jarring transition from evacuation to “real life” in the U.S.

Mark signed up for the mentorship program and was paired with Jake McGrew, who had gone through evacuation back in 2014 after the Revolution of Dignity. A Hillsboro, Oregon native, Jake recalls that he wished he had more support when he first returned after evacuation and wanted to provide newly-evacuated volunteers with whom they could work through their experiences. In addition to providing support for eRPCVs, Jake says he just wanted to re-engage with other Peace Corps Ukraine Volunteers: “I have been an RPCV for about four years and wanted to hear more about how Peace Corps Ukraine is doing.”

The two first got in touch via email and exchanged messages back and forth. They hit it off immediately after discussing their evacuation ordeals. Jake eventually returned to Ukraine after evacuation to continue his service, something Mark hopes to do, as well. For Mark, the opportunity to hear from someone who had been in a similar position after evacuation was heartening:

“[Jake’s] story was an illustration of the fact that an evacuation doesn’t necessarily mean the end of service, which was a worry of mine. He was very honest about how his experience disappointed him at first and threw his life into disarray, although he eventually overcame a lot of that...Hearing [about his experiences] made me feel a little better about taking my time to get myself together again.”

The two were soon able to turn their common bonds into a Third Goal activity for some of Jake’s middle school students at Wonderful College Prep Academy in Lost Hills, California. They set up a Zoom call and Mark shared a bit about Ukraine and his Peace Corps service with the students. It turned into a positive and fun activity for both RPCVs and Jake’s students. Mark enjoyed the chance to practice being an informal ambassador and educator about Ukraine, “I’ll have that role for the rest of my life,” he said.

Looking to the future, Mark and Jake both have plans to return to Ukraine. Mark has been keeping in touch with his students and counterparts in Radekhiv by conducting weekly English clubs online. He knows how hard Peace Corps staff are working in Kyiv and hopes to get back to his site as soon as the COVID-19 situation permits. In the meantime, he’ll be studying for the LSAT and leaning on some key advice from his mentor: “Jake mentioned that it’s possible that some people in America may not immediately understand my desire to return [to Ukraine]...Getting Jake’s perspective makes me realize how important it is for me to communicate the meaning that Peace Corps and Ukraine hold for me.”

Jake intends to teach for one more year in Lost Hills before moving abroad to teach at an international school. While teaching, he will work toward becoming a school administrator, with a view toward opening his own English-language school in Ukraine someday. Who knows, maybe Jake and Mark’s next classroom collaboration will be in Ukraine.