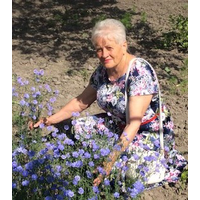 A 70-year-old grandmother with tidy white hair and an animated voice for storytelling, Vira Prysiazhniuk loves flowers. She wanted to come to Washington, DC in the spring to visit her daughter, Kate, and see the cherry blossoms, but Kate was concerned about the threat of war and encouraged her to come visit sooner - just in case. Vira’s flight from Ukraine to the US was booked for February 25th, 2022.

No flights left Ukraine that day.

Russian troops invaded Ukraine on February 24th, and began rapidly advancing from the occupied Crimean Peninsula toward Vira’s home city, Mykolaiv. Vira doesn’t like talking about what happened next. Kate occasionally chimes in to help her mother tell the story if she becomes overwhelmed.

Vira left Mykolaiv for her native village, Posad Pokrovske. There she stayed with her eldest daughter, Natasha, in a house that has been in their family since the days of Vira’s grandfather, Petro, born in 1885.

Before the war, Vira typically spent two weeks at a time in her apartment in Mykolaiv, and then two weeks with her family in the village. “I had very many roses there,” she remembers. “And chrysanthemums, tulips, various flowers were there. I was constantly watering them and feeding the soil. I especially love the roses - I had wanted to plant 100 of them, but I only managed 30!” 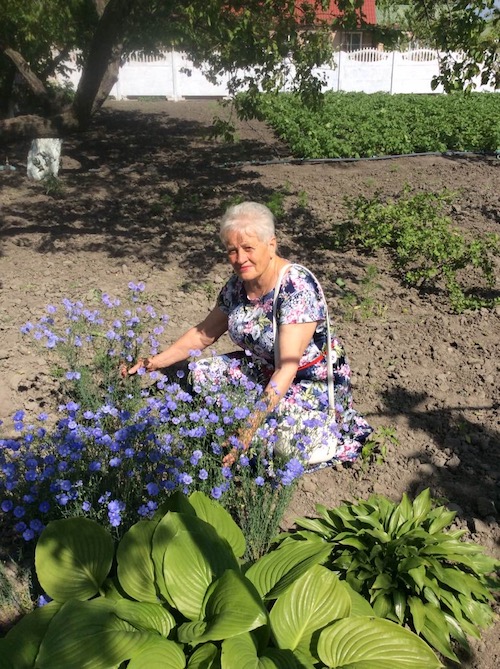 Today, most of the village’s 2,500 residents have fled. As Vira describes it, “From the furthest road at the edge of town, now you can see the main highway, because they managed to destroy all the homes.” Posad Pokrovske straddles a highway that connects Mykolaiv and Kherson - a highway that became a thoroughfare for invading Russian troops.

“These homes all survived World War II,” Vira says. “They were not knocked down then. But today, in this war, they have all been destroyed. Now the weapons are such that they were all destroyed.”

Just a few months prior, Kate and her husband, Devin, had visited Posad Pokrovske for the first time together since they got married in 2017. Though Devin served in Peace Corps Ukraine, he and Kate met stateside while Kate was working as an au pair in Washington, DC.

“My host mom registered me on a dating website,” Kate says, smiling. “And that’s how I met Devin. When we saw his profile, he shared with us a link from the news from Ukraine that he was a Volunteer in Zaporizhzhya, and then when we just saw him, my host mom said, ‘Oh, he looks like your husband!'”

Vira came to visit Kate and Devin in Washington, DC for the first time shortly after their wedding in 2017. “We spent a lot of time as a family within two families,” Kate shares. Vira made multiple visits to the US and met Devin’s family, and then, in August 2021, Devin and Kate made their first trip to Ukraine together as a married couple. “He got to see my family. We went to see my mom in Mykolaiv, and we went to see my sister, who lives in Posad Pokrovske. We saw everything and everybody and we saw a lot of my friends in Mykolaiv.” 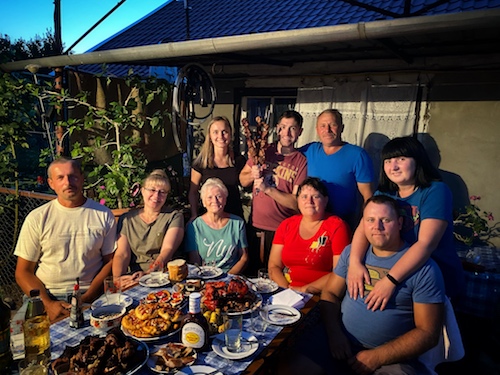 Gathering at the family home in Posad Pokrovske.

Kate says one of the saddest things is not knowing whether the new headstones they set up for her family members’ graves during that visit are still there. “We installed new stones for my dad, for my grandmother and grandfather… we just put the new ones in, and now we don’t even know if they’re still there.”

For Devin, it’s hard to believe that the village he just visited a few months ago is, essentially, gone. “The school that got knocked down was the one Vira went to, and her grandson went to, and her daughter went to.” The family roots in Posad Pokrovske go back for generations.

“Everybody who ever was able to evacuate anywhere - they want to go home,” says Kate. “Even if they don’t have a home anymore. Like my sister - she doesn’t have a home anymore, and she’s still very determined that she will go back home. I feel sad to even ask her, ‘Where is your home right now?’ Because the village is covered in bomb pieces. It’s not safe... you will start digging your garden and you will dig out a piece of bomb and you will explode. Is this home?”

Devin and Kate shared the details of how they helped Vira escape in a story published by Global Strat View. The Ukrainian military had just one spot left on a bus, and Kate’s sister, Natasha, got Vira onto it. Her trek brought her from the village to Mykolaiv, then to Odesa, and eventually to Romania, where Devin and Kate flew in to meet her and accompany her to DC. All along the way, a network of friends, family, and acquaintances helped Vira get from one stop to the next until she reached safety in the United States. Though she is safe now, she misses her home.

“It’s hard to live our everyday life,” says Kate. “We can’t enjoy whatever we would enjoy if there would be no war in Ukraine, but we’re trying.” 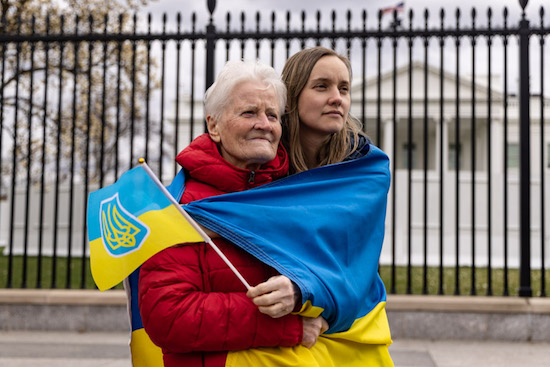 Kate and Vira at a rally outside the White House. Photo by Robin Fader.

Devin and Kate keep their spirits up by helping others. They launched a fundraiser to help bring drinkable water into Mykolaiv, where the supply was cut off when a bomb damaged the main pipeline. Their friends and family who are still in Ukraine - many of them the same ones who helped Vira to evacuate - now purchase and transport supplies.

“My friend’s husband, Vannya, we’ve been sending him money. With his help we were able to buy two huge refillable canisters, so he can drive to another city to get drinkable water and then give it to people in Mykolaiv.” Kate says this is just one of the direct aid efforts they have supported. Their fundraising campaign is still active, and can be found at: https://gofund.me/562d9cf7.

It was Mother’s Day when we interviewed Kate, Devin, and Vira. Devin shared that they would soon be going out to lunch to enjoy some shrimp, at Vira’s request. Kate explained that they try to keep Vira distracted, because otherwise she just reads news from back home and cries.

Kate has gone back to working as a nanny with the family she worked for previously, and Vira goes with her to help cook food for the kids and look after the family’s puppy. While talking about the war brings Vira to tears, she lights up when talking about her work with the family. Like many a Ukrainian grandmother, she proudly tells how she cooks homemade piroshky, mlintsi, and soups. “They accept me like one of their own,” she says of the family she and Kate work for - “as a grandmother.” Nevertheless, she dreams of the day when she will be able to go home, and again plant roses in Posad Pokrovske. 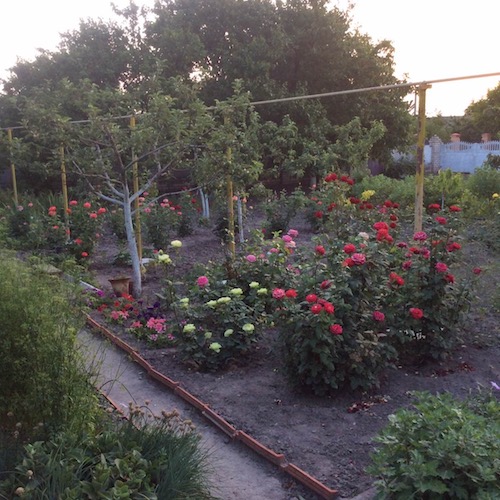 Our deepest gratitude to Kate, Devin, and Vira for bravely sharing their story with us. “She feels good to share”, Kate says of her mother. “She feels that the stories can be heard and can be helpful.”